Skip to content
"I am Jugger" is the upcoming documentary prepared by Alejandro Asensi Barbera. He currently raises funds through IndieGoGo to realize this quite impressive sounding project, which should become very international:

I am Jugger follows Jugger players all around the world and will share the lives of these young athletes; their impressions and styles of play, capturing the passion they feel for this sport and show the differences to other major sports and the activity in different countries like Spain, Germany, Ireland and United States. We travel with a select group of jugger players to the World Tournament in Berlin, where they will try to win the ultimate prize in this relatively unknown sport.

We will see different explanations of the rules, styles and strategies used by different teams, and follow them as they train and prepare for games together.

(Just a word of warning, IndieGoGo seems to think that eating processor time through shiny app overload is a good idea). 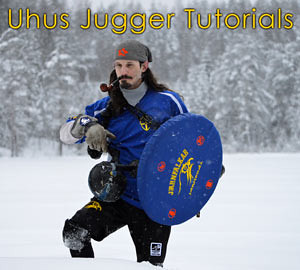 After reading questions where one could find tips how to play the shield I decided to do a little tutorial series myself. So now I can proudly present the first issue of Uhus Jugger Tutorials: Basics of Pompfen making. Because before you can play the shield, you mostly will have to make one ... Part 1:

Part 2: Oh and sorry for my English folks, I am quite focused on Swedish at the moment – I nevertheless hope you enjoy the videos!

Here are some more (partly quite unusual) videos from other countries. Thanks to Jugglers Jugg for collecting them!


Juggers from all over the world have contributed to the international Jugger documentary project of Runtun Films. Here is the trailer -- nice work! Enjoy!

A nice clip from the Irish Tournament of April 2008, Irish and German teams. Ireland will visit the German Tournament in September in Berlin. About a week afterwards, Australian players and some Germans will come over to play in Dublin again.

In addition to Bos article, here a glimpse in US Jugging. The differences between German and US Jugger style show up nicely.

This post wont be long, but i want to show you our latest video from our tournament back in '06.

I will be back soon with a longer post about Juggin in Denmark and the differences in our gameplay country to country.

Also check out our homepage at http://skullfight.ripen.dk, i know its in Danish, but check it out anyways

... the Jugger film was published in 1989 and Jugger has been played since ca 1993? Film analysis
... they play with a sledgehammer in Australia?