The German Jugger Rules as an audiobook! Yet only in German. 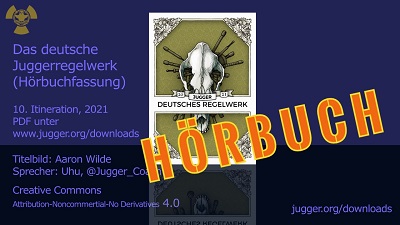 Please drop us your updated Jugger rulebooks for the International Jugger Rulebook Archive. First has been Svenska Juggerförbundet with their Swedish Jugger Rulebook v. 2.1, now also available in English!

If your country has updated their rules as well, please drop us a link to the PDF* so that we can keep the archives updated. Thanks!

*) Usage terms: Creative Commons or explicidly allowed to use for archive reasons by the IJB, of course

A video on the history of the  Jugger chain and why it evolved as it did, as well as one about the German Refereeing Rules and Best Practice, are live now:

If your country has updated their rules as well, please drop us a link to the PDF* so that we can keep the archives updated. Thanks!

*) Usage terms: Creative Commons or explicidly allowed to use for archive reasons by the IJB, of course

Germany has been the very first country where Jugger has evolved into real-world sports. Yet until today, there is no assocation of any kind which would stand for Jugger in Germany; instead, we have the rulekeeper comittee, a Jugger League council, local league councils, and the German forums.

Recently, the discussions from 2011 about whether or not to form an association has come up again, accompanied by a survey, and kindled -- finally -- the forming of a national association. Nothing is set yet, but talks are intensifying.

Read more at the jugger.de blog (in German). 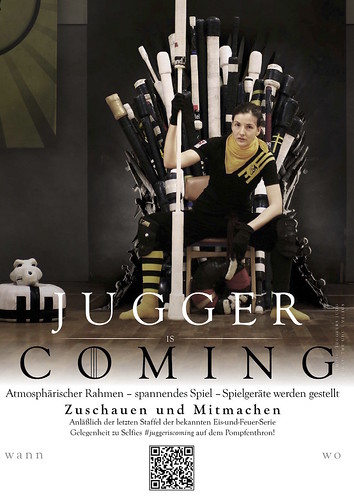 Kay Frank of the Orange Juggernauts has designed a Jugger game variant where four kingdoms fight for the throne.

With the last season of "Game of Thrones" having come to an end this week, it was just one step to adapt the Four Kingdoms game to the popular show.

He was so kind to allow me translating the rules into English and putting them in form, together with photos from the event. Note that they might be updated.

[ Read also more about the event in a German newspaper ]

This is a collection of international Jugger rulebooks, including historical versions, where available. Countries in order of the fact-based knowledge of introduction of Jugger to them, where applicable, otherwise of their first rulebook's appearance.

If you know other national Jugger rulebooks, you are most welcome to drop us a note!

Continue reading "International Jugger rulebooks: Jugger Archive I"
Since the German Jugger rules will soon undergo a revision and rule changes voting, I would like to offer some basic thoughts on the sport and its rules.
Sorry in German, due to lack of time for translation. Many projects currently at hand. 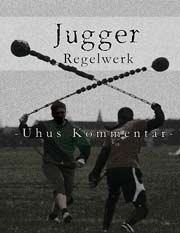 
We hope it will help Juggers who come to Germany to play, and also people with an interest in the German Rules.


The rules can be found on the jugger.org community site, under 'English Version' for the translated version.
A few months ago when I came back from a training I though about all that stuff that we discuss very often. But in the four weeks I spend in Dublin we had not one discussion like this. So I started to compare the Rulebooks.
The version of the irish Rulebook I used was written by Peter Houlihan. This version isn't final but there will be an election about his Rulebook.
Let's start with the point that everybody knew who played once against an irish team. In irish Jugger an double is only a double if the two players hit each other exactly in the same moment. Here I always have the discussion if it's a double or not if I hit somebody with my chain first, but he hits he too. "Was it a half second or not?" Who can make that decision? In this point I think the irish rule is more practicable and more precisely. Here's the part from the irish rules:

The first player to hit the other wins, no matter how close behind the other player was. However if two hits land so close together that the gap between them cannot be distinguished they are considered to have „doubled“ [...]. Either player may call a double and if they insist (if they call it three times or more) both players must accept the double [...]. Also, if one player hits another at the same time as they strike a third the second two players are considered hit.

After a player has completed their count they must attempt to rise immediately if they are unpinned, runners are exempt from this and may stay down as long as they wish. When rising a player may block with their spar as soon as their knee is off the ground, but their hits will not count until half a stone after they have begun their rise.

Well, now we could discuss if it's need's to be a half stone or if that's a too long time to rise, but in this way you don't get a discussion when you're risen or not. In my point of view that's better than the german version.
For the runners it's allowed to stay down tactically. The same for spar players but only if another spar player is in range, after that he must rise immediately. In the german rulebook there isn't an exact definition:

In comparison the part from the irish rulebook:

Another little difference is about pinning. In the german rulebook is written that you can't pin two people at the same time. In the irish rulebook it is:

Only one player may be pinned with one spar at a time however a player with two short swords [but not q-tips] may pin two other players.

That could be useful if you have someone who is good with two short swords.
And what about the chains? In irish rules only a 180° wrap counts as a hit, and if you wrap a spar the first 360° count as a hit if the ball gets you. In my point of view we should add this to the german rulebook and as I know a few teams already handle it this way.
Now the differences for the runners. A point in irish Jugger counts once the skull is in the goal, not when no runner touches it:

A runner is considered to have scored from the moment any part of the skull enters the goal.

Another point is that if you leave the court within the range of a chain you must get down for eight stones.
And about the stones, according to irish rules a stone is 2 seconds and not 1,5 as in the german rules. Also there aren't any limitations for changing players. And the last point is that the court lines aren't part of the pitch.
At the end I can say that in the german rules is more space for interpretation and that the most rules in the irish rulebook are easier. I for my part prefer the irish rulebook.

... today's Sports Jugger variant has alledgedly been developed in two places in Germany simultaneously, without knowing of each other?
... the spelling "Qwik" had been defined by the screenwriter in the ending credits of the movie?